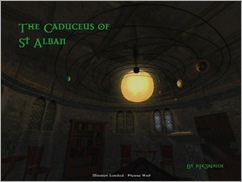 Bikerdude is likely the most prolific mapper when it comes to TDM. He’s made the most FMs out of all the authors that have churned out a mission in the last near three years since TDM’s original release. And while I wasn’t a fan of his FMs originally, I have since grown to like them.

Under the tutelage of Melan, he’s learned more than a few tricks, and just like his mentor, prefers to design city-based FMs, like “Business as Usual” or the excellent “St. Alban’s Cathedral”, with plenty to explore.

The Caduceus of St. Alban is the follow up to the aforementioned FM, and the scale with this one is somewhat smaller, but there’s no shirking when it comes to design. Caduceus was entered into the Vertical Contest of 2012, and it shows: great big spires that reach the sky, with plenty to climb, such as vines and pipes. It’s a veritable playground – on the outside anyway, with some fantastic atmospheric effects such as a low lying fog that hugs the ground.

On the inside there’s stairwells and lifts that take you to the several floors, which are broken up by the three or four spires – it can get confusing traversing from one to the other at first. 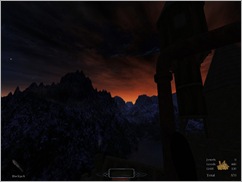 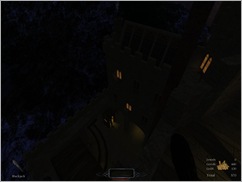 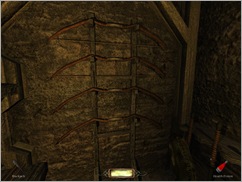 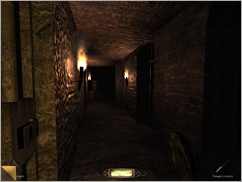 Hover mouse over pictures for captions, if available.

But Caduceus isn’t without its faults. For one, combing through the TDM forum thread dedicated to this FM, you would find that there are some bugs in the mission, such as unpickable doors that need a key, that actually can be picked in the first place. Entering the “spider caves” can leave you stuck. It’s very hard to get out once you’re down there, and you might be forced to cheat by noclipping out of there. Another minor thing here, but more care could have been used with spelling with some of the items you acquire in the mission. “Armoury” (or “armory” if you speak yank) – well this mission yielded yet a third way to spell or misspell this word: “amory”. And “quarters” was misspelled as well. Things I don’t like to see.

Personally I think the design, apart from getting a bit lost in the spires, is excellent – particularly on the basement levels where you’ll find the armoury. The layout is great, smoothly travelling from lifts to stairs, through dark, torch-lit corridors. Mind that your brightness is set high enough though, otherwise you might miss a few doors down there. It’s poorly lit, but what would you expect in a place like this? It fits. But seriously, lighting could have been a bit better down in the dungeon and lower levels.

Climbing up the pipe to the top where the water tower is (one of the alternate ways up to this level) was thrilling, but once I got there, to the top, I was a little disappointed, being greeted with both the water tower and the bell tower, which were mainly for decorative purposes and didn’t serve much purpose as far as I could tell. Not that it’s a bad thing. But the view from up there was. There was just a background, much like you would have expected to see in a title like Half-Life or Quake II (I suspect Bikerdude is influenced by such games with a more modern, industrial feel, when I look at other maps such as Yan’s Test – a conversion of a Quake 4 multiplayer map), and it betrayed that former sense of awe I had on the lower levels, as it showed a disconnectedness; a floating island in the middle of nowhere. I understand this was probably to prevent a performance hit, as there are all ready FPS drops in the mission as it is, so it’s probably more of a design choice.

+ Plenty of interactivity with the environment (vines, pipes to climb)