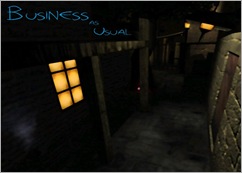 This is a relatively small map made by Bikerdude – in fact it’s his first ever fan mission for The Dark Mod, and it’s not too shabby at that. Even though he received a lot of help from the TDM forum dwellers, Bikerdude all ready displayed a knack for making enjoyable, interactive, and challenging missions at this early stage.

You start off in your apartment, and go about collecting your gear. This makes a change from starting off with everything, as you usually find. You’d be wise to get your lantern and use it to make sure you have everything. Search the place thoroughly – in fact, this is a golden rule when it comes to every room, in every mission.

Once outside you'll see that there are several buildings, and unlike other maps of similar size, almost all of them are accessible – although not all of them have much inside and appear to be uninhabited. Or are they? Yes, there’s less waste of space or opportunity here than some maps. Places to explore include a tavern, where the civilians won’t react to you in any way, whereas the guards and city watch outside will hound you if seen on the streets which have quite a bit of electric lighting going on to make sneaking a tad more of a priority. There’s also the local City Watch post, and a hotel. These are the main three places on the street level.

On the subterranean level, there’s the sewer, accessible from at least to or three entry points, and there’s a “secret” or two here to be had – in fact it’s a critical mission objective, so if you can’t find the hidden area, then you are in trouble.

The hotel is likely where most of the action will take place, and in the guests’ rooms you’ll find… guests, mostly sleeping. Hardly guards are present here whatsoever, making things a little too easy. Even though there isn’t much in the way of story here – just a case of “I stole something, somebody stole it from me, now I need to get it back”, plus some other optional extras – the focus on level design and interactivity isn’t unappreciated. To me, a small map which has lots to do and places to poke around in is more enjoyable than a big map which doesn’t do much to make its needless waste of space any more enjoyable. This is a map that shows that a little can go a long way.

Bikerdude’s maps, including this one, are a bit tricky with secrets and the like, which forces you to frob just about everything to see if it serves a purpose or not, making the first playthrough the most challenging. After you know where to go and what to do though, the 2nd playthrough, and onwards, is a breeze for the most part, and allows for little replayability – particularly in a small map such as this.

+ More usage of what the map has to offer, with little wastage.