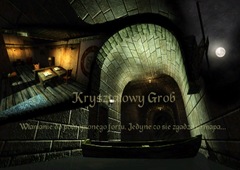 I first saw this FM up for download on The Dark Mod’s official website. But the file was actually hosted over at Darkfate – a thief fan site of sorts. A mirror still hasn’t been put up over at TDM.

I was a bit apprehensive about downloading and installing this FM. I’m just so paranoid, and the last thing I needed was some fan mission made in a foreign country. I tend to get a bit suspicious. That and it wasn’t hosted at the usual place, but off-site, and that made me a little wary.

But security concerns aside, I learnt by reading through the thread over at the TDM forum that this mission was well worth a play. So I decided to give it a go. Starting off, I found myself on an island. I’d somehow rowed out here, got past the large walls surrounding the property, and run aground. Ahead of me lay a large building, surrounded by water – perhaps a moat - which towered into the skies above. My FPS was getting a kick in the balls all ready.

I noticed straight off the bat that there are several entry points – from picking locked doors in the dock below, to climbing up ivy vines and pipes to reach one of the higher floors. I was highly impressed. Once inside, this feeling of amazement was extended by the rather good level design. A good mixture of small, pokey rooms, with larger occupied rooms – there’s not a lot of space wasted here. Everything seems functional. It works, and like I said: there are multiple ways to get from one floor to the next, whether you take one of the stairwells, or climb up a chain linked to a crane of sorts. The layout is rather good. There’s seemingly endless areas to explore. And just when you’ve seen it all, there’s more on the next level.

I will say that despite several keys being around for you to find, there’s once again on overreliance on lockpicking which is so addictive with mappers for TDM. And the locks aren’t even that complex to pick, ironically. 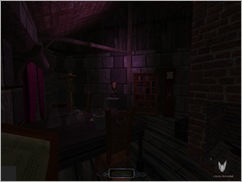 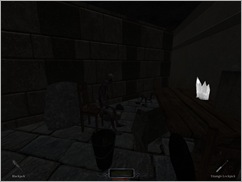 Hover mouse over pictures for captions, if available.

Lighting is used to good effect in most areas, and there are different light sources – not just fire-lit torches, but also electric lighting, too. And most of the rooms have light switches that even AI interact with occasionally. I wasted most of my water arrows and holy water potions dousing a haunt after he saw me when switching on the bloody light in one room.

But despite this one experience, overall there isn’t much challenge as far as AI goes. There are two or three areas where AI is heavily concentrated, which means two things: first off, it’s easy to gain access to the place using most entry points, and two, it’s nigh impossible to get past said areas because the AI have overlapping, confusing patrol routes which guarantee the player will be seen and murdered instantly.

It’s also difficult to know where to go and what to do, as this FM’s greatest flaw is revealed right from the get go (and I mentioned it earlier too): it’s foreign. The objectives are in Polish, the text and readables in-game are in Polish too. It’s been weeks (months now) since its release, and someone has yet to come up with a decent translation for it. So I’m wandering around this otherwise great map but I don’t know what the hell is going on – and that takes away a lot of this map’s charm; it’s done almost everything else right. The good news is that not only will someone eventually get around to getting a translated version up, but from TDM v 1.07, internationalization is being featured in the mod, which is supposed to help in situations like this… somehow.

Crystal Grave (probably the most awesome name for an FM I’ve heard so far) reminds me a lot of “The Outpost” – one of the first TDM FMs ever released, back in late 2009 - except it’s probably bigger, and better in several respects. There are a few niggles with it, such as the ones outlined above. I’ll also add that the texturing could have been better, and there were a few bugs – particularly with lighting. I would stand in shadow and yet my lightgem was lit up like a Christmas tree (sorry for the reference, but it’s December at the time of writing this). That and opening some doors and windows resulted in the infinite looping slamming bug which would really put a damper on things if the AI actually noticed it.

Despite its flaws, it’s not bad; not bad at all.

- Foreign with absolutely no translations for text, objectives, etc.